In the United States, mention "Mardi Gras," and the first city that pops to mind is New Orleans. Fittingly, my personal story of Carnival also begins in this fabled town. Bourbon Street revelry. Parades down St Charles Ave. Hurricane daiquiris at Pat O'Brien's. Chicory coffee and beignets at Cafe du Monde. And beads. And doubloons. Lots and lots of beads and doubloons. What people will do to earn these trinkets is the stuff of legend.

Mardi Gras is French for Fat Tuesday, the day before Ash Wednesday. Ash Wednesday of course begins the solemn, 40-day long season of Lent culminating in remembering Christ's crucifixion and celebrating his resurrection on Easter. (Well actually, it's 46 days, but how one counts the days of Lent is the subject of a different post.)

I first experienced Mardi Gras as a cadet in the Army ROTC Drill Team in 1981. By day, we competed against other schools' drill teams, put on demonstrations for the public, and marched in parades like Endymion, Isis, and Apollo. By night, we attempted to pack as much of the intoxicating sights and sounds as possible, before curfew--complete with bed check.

I was out of the country in 1982, but I did return with the Notre Dame Army ROTC Drill Team to Mardi Gras in 1983. I've also been back for the Sugar Bowl to watch Notre Dame disappoint Steve Spurrier's  favored Gators on New Year's Eve, 1991. But I digress... My point: Pictures do not do this city or its beguiling scenery justice! The French Quarter of New Orleans is spectacular year round, but is not to be missed during Mardi Gras!

Carnival originated as a pagan ritual of spring, but it was co-opted by the early Christian church and incorporated into the liturgical calendar as a precursor to season of Lent. As the Church grew and spread her influence, the traditions of Carnival spread as well. Today, Carnival is celebrated around the world, particularly in Catholic areas which were, at one time, under the influence of the Holy Roman Empire.

New Orleans is synonymous with Mardi Gras in part because it was settled by French Catholics. (More information about the history of Louisiana and New Orleans available HERE.) In the next installments of our Carnival series, we'll call out similar Roman Catholic roots and notice local differences in how Carnival is observed in Venice, Mainz, Rio de Janeiro, Daytona Beach (?), and my home in Alexandria.

Let the Good Times Roll! Or, as we say in Nawlins, Laissez les bons temps rouler!
Posted by DBDoane at 8:47 AM 0 comments

My brother Todd is one tough hombre.

He has brain cancer (Grade 4 Glioblastoma Multiforme, or GBM IV) and I feel sorry

Surgeries, radiation, chemo, whatever it takes, tumor. You can hide and we will find you and dig you out and crush you. The little bits you leave behind? We'll slice 'em with a cyber knife before they can even take root, and then we'll slice the slices. Bet you didn't see that coming, now did you? There's more, you twisted little freak. You can change your DNA and we will simply come after you with a different toxic cocktail designed to snuff you out.

My brother has tools: (a) a chemo port in his chest so he can pump you full of poison; (b) titanium plates like manhole covers in the side of his head. He can reach in there and choke the living shit out of you any time he wants, you shape-shifting little parasite; and (c) a zipper on the right side of his head. That zipper is proof that he is ready for you.

Meanwhile, what have you got, tumor? A few demons in your corner? We have a host of angels, prayer warriors around the globe, and a faith you cannot shake.

You are not one to give up easily, or you would have left already. I think we can all respect you for your tenacity--if not your judgment. But here is the bottom line. You should have stayed home. You are messing with the wrong hombre. You leave now, peacefully, and we'll call it a draw. You stick around, and

...we'll kick you back to the gates of hell, you gnarly bastard!

This is the opening overture, the first of a planned series of 8 posts about Carnival--the world's biggest party. Carnival is the name for pre-Lenten festivities celebrated in grand style mostly in the predominantly Catholic regions of Europe and the Americas. I am interested in sharing a few personal perspectives on Carnivals past, present, and future.

I grew up Protestant in Nebraska and I am proud of  it. One of the reasons I am who I am is that I grew up in appreciation of the simple things, like:

Urban kids,
you don't even know
what you are missing.

But the flip side of the same coin has also been significant in shaping me. The lack of stimulation in my small town drove me to leave home, go to a big name University out of state, join the Army, and see the world.

Now, some 35 years after I left home, I can look back on the fun, travel, and adventure of 5 years at Notre Dame, 28 years in the Army, and 2 years on my own with a sense of pleasure and accomplishment. In what I hope is the middle of what I hope will be a long life, I aim to carry the basic values of my youth while tightly gripping the handlebars of wanderlust...

Being Protestant and living in Nebraska, I did not discover Carnival until I left home and attended a Catholic University. When I was young, we celebrated Easter, but the austerity of Lent was not part of our tradition, and neither was the idea of  a pre-Lent party in which the next 40 days of sins were committed in advance, in one glorious week of debauchery.

What follows in subsequent posts is a summary of my own experience of Carnival in New Orleans, Italy, and Germany, as well as planned trips to Brazil and Daytona, plus a little about how we celebrate Carnival in my current home of Alexandria.

Watch this space for the next installments, and if you are so inclined, share a memory of what Carnival means to you.

Enjoy! or, as they say in New Orleans,


I am so excited about the fact that MARK NEPO is coming to DC for a lecture and workshop!  Please consider whether you can make it to DC Friday night and Saturday, 21 and 22 March.

Mark Nepo is perhaps best known for his book, The Book of Awakening, which has inspired many DEEP THOUGHTS.

You know I have read this book over and over again, and that it has changed my life, and that is why I have shared it with you in many previous posts.

Can you join me? Wouldn't it be great to be in a small group together during the workshop?

The event is sponsored by the Shalem Institute and hosted by the First Congregational United Church of Christ at 945 G Street NW in Washington, DC.
I am beyond excited! Join me? Bring a journal and open heart, head, and hands!

Can't make it? You can LiveStream the Friday evening lecture on your computer at home for only $20.

Please feel free to forward this announcement to your friends who might be interested, with the caveat that there are only 300 seats available, and they are going quickly.

For readers who join me on The Quest for Brewed Nirvana, I would like to share a helpful tool.  The US Distribution Map by Seek-A-Brew is available HERE.

The home page looks like the screenshot above. Press Virginia, for example, and you will learn that 137 brewers distribute their wares in our fair state, as of the latest version.

The site offers a compare feature, which returns a Venn diagram of two states. Here in the Commonwealth of Virginia, particularly in NoVA, we also have easy access to beers distributed in nearby states of Maryland, West Virginia, Pennsylvania, and Delaware, and the District of Columbia. By going across the Potomac to the north, Virginians gain access to 12 more brewers as shown in the table below. We can also venture east of the Potomac and enjoy 16 more brewers who distribute in Maryland.  Just a bit more effort to cross into Delaware and we are rewarded with access to 4 more.

Welcome to Beervana. Yes, Santa Claus, there is a Virginia!

We're having a super "Bowl" party at Casa del Foam.


Not happening:
Enjoy the food, fun, foam, and frolicking football fandom. And remember to vote for your favorite ads! 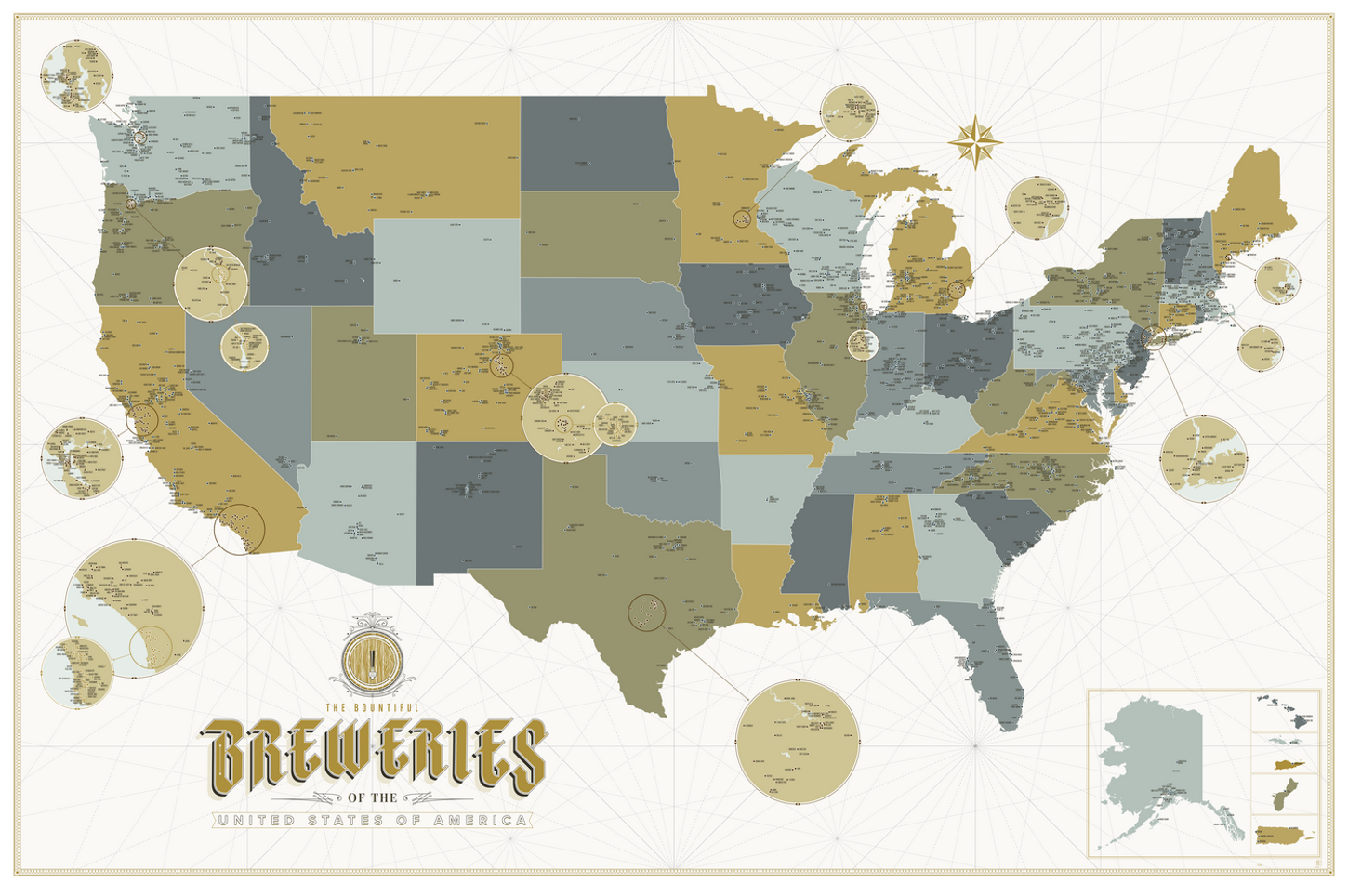 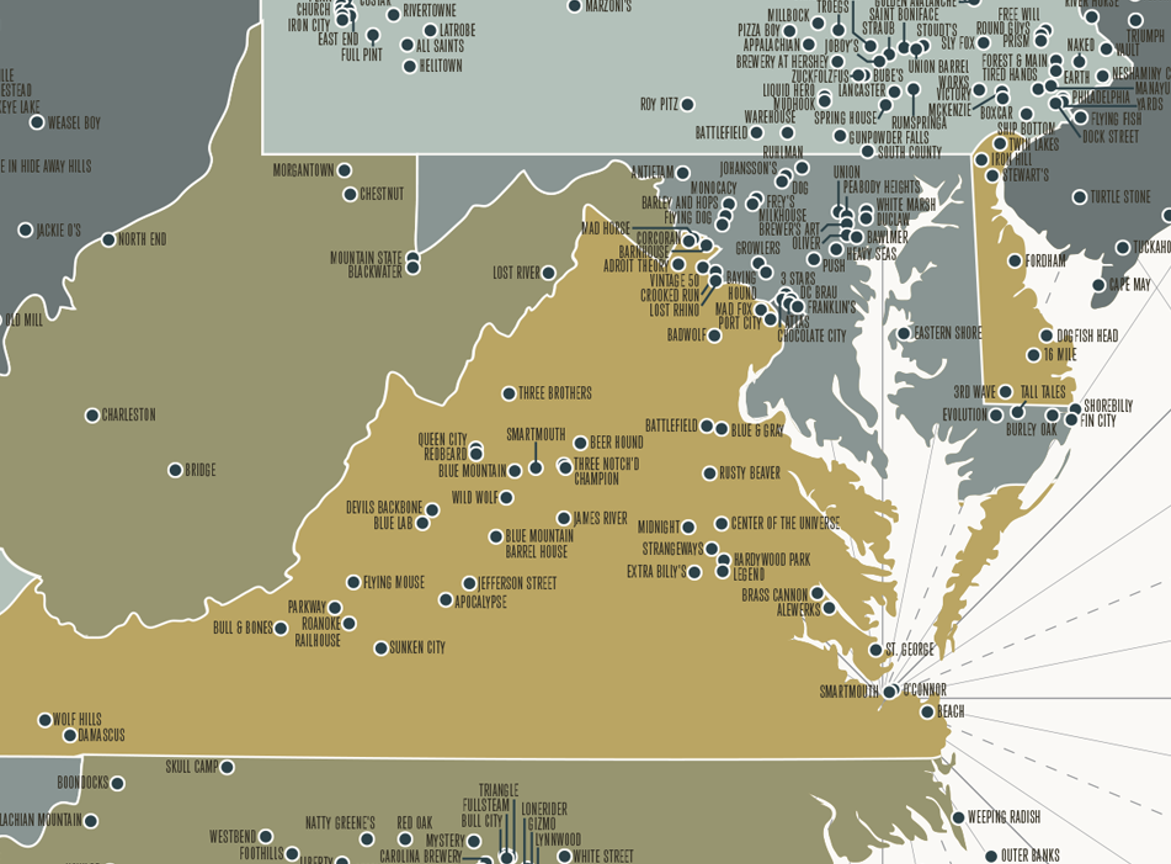